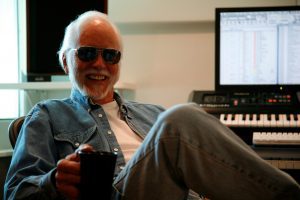 Composer of TV Themes For The Young The & Restless, Mork And Mindy,

And On Albums by Artists like Bobby Darin, Barbra Streisand, Sammy Davis, Jr., Peggy Lee, The Association, Harpers Bizarre, The Ronettes, And The Carpenters

BOTKIN, whose career spanned four decades, is probably best known for his iconic theme for the longest-running daytime TV series in history (47 years), CBS’s THE YOUNG AND THE RESTLESS.  The song, later entitled “Nadia’s Theme” after ABC Wide World of Sports used the music in a montage during the 1976 Olympics featuring Russian Olympic medalist, Nadia Comeneci, garnered Perry a GRAMMY Award for “Best Instrumental Arrangement” in 1977.   In 2001, the theme climbed the charts again as the backbone of Mary J. Blige’s hit single, NO MORE DRAMA.

One of the most prolific film and TV composers of the 1960’s and 1970’s, in addition to his themes for MORK AND MINDY and THE ABC FRIDAY/SUNDAY NIGHT MOVIE, the latter of which ran for seven years from 1974 to 1981, Botkin’s TV credits include: HAPPY DAYS, LAVERNE & SHIRLEY, THE SMOTHERS BROTHERS SHOW,  ADAM’S RIB, and QUARK. He scored such films as GOIN’ SOUTH, SKYJACKED, TARZAN THE APE MAN, THEY ONLY KILL THEIR MASTERS and BLESS THE BEASTS AND CHILDREN, for which he received an Oscar “Best Original Song” nomination, in 1971, for the title song, performed by The Carpenters.  An album he arranged and conducted, featuring musicians known as The Wrecking Crew, BONGO ROCK by The Incredible Bongo Band, is now credited with the birth of hip-hop in a documentary film, SAMPLE THIS!. The album also featured two of his original songs, one of which was featured in the BABY DRIVER soundtrack.

As an arranger, he worked with the top producers of the day including Phil Spector, Lenny Waronker, Rick Jarrard and Van Dyke Parks.  His arranging credits include many of the greatest hits of their time, “Wichita Lineman” and “Rhythm of the Rain,” and artists such as Glen Campbell, Dory Previn, Barbra Streisand, Sammy Davis, Jr., Bobby Darin, Jack Jones, Peggy Lee, The Association, The Everly Brothers, The Carpenters, The Supremes, The Ronettes, Connie Stevens, Jose Feliciano, Bobby Gentry and Paul Williams.

BOTKIN and his business partner, George Tipton, discovered young singer/songwriter, Harry Nilsson, who was working at a bank at the time, and signed him to his first publishing contract, resulting in several collaborations between Harry and PERRY including his PANDEMONIUM SHADOW SHOW album and a musical. PERRY is featured prominently in the documentary, WHO IS HARRY NILSSON (AND WHY IS EVERBODY TALKIN’ ABOUT HIM)?

PERRY began his career in music as a trombone player in a high school Jazz quartet that included film composer John Williams on piano. He played in the Black Band at West Point and attended Indiana University and the film scoring program at USC’s Thornton School of Music.

In 1955, he joined a vocal group called THE CHEERS who scored a major hit with “Black Denim Trousers.” PERRY and one of his early co-writers had success as a duo called THE FRATERNITY BROTHERS whose songs are still licensed in TV and films.

His father, Perry Botkin, Sr., composed the underscore for THE BEVERLY HILLBILLIES TV series and played guitar and banjo in Bing Crosby’s band, appearing in several movies with him. In 1956, Perry Sr. and his son guest-starred on a now classic episode of THE ADVENTURES OF OZZIE AND HARRIET (“The Banjo Player”) in which PERRY, JR. had a speaking role as a high school friend and bandmate of Ricky Nelson.

PERRY BOTKIN, JR. was born in New York but moved to Los Angeles with his family in 1936 and lived in the same neighborhood for 84 years. He is survived by his wife Liza, son David, and grandson Daniel Tyler Botkin.